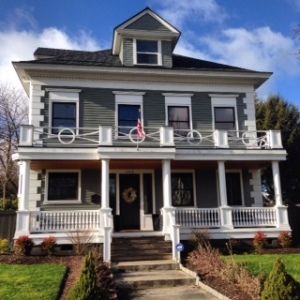 This home was designed and built by the Cornell Brothers in 1895 for William Gardener.  Mr Gardner was a business partner to William Ferguson and they owned and operated a plumbing and steam supply company.  In 1948, the house became part of a sanitarium that had been established in Mr. Ferguson’s neighboring house in 1941!  Large additions were made to both houses in the 1960’s.  In 2006, when all medical usage of the buildings ceased, the North Slope Historic District persuaded the owner to remove the additions and the homes were returned to residences.  The properties have now been restored to their original glory.